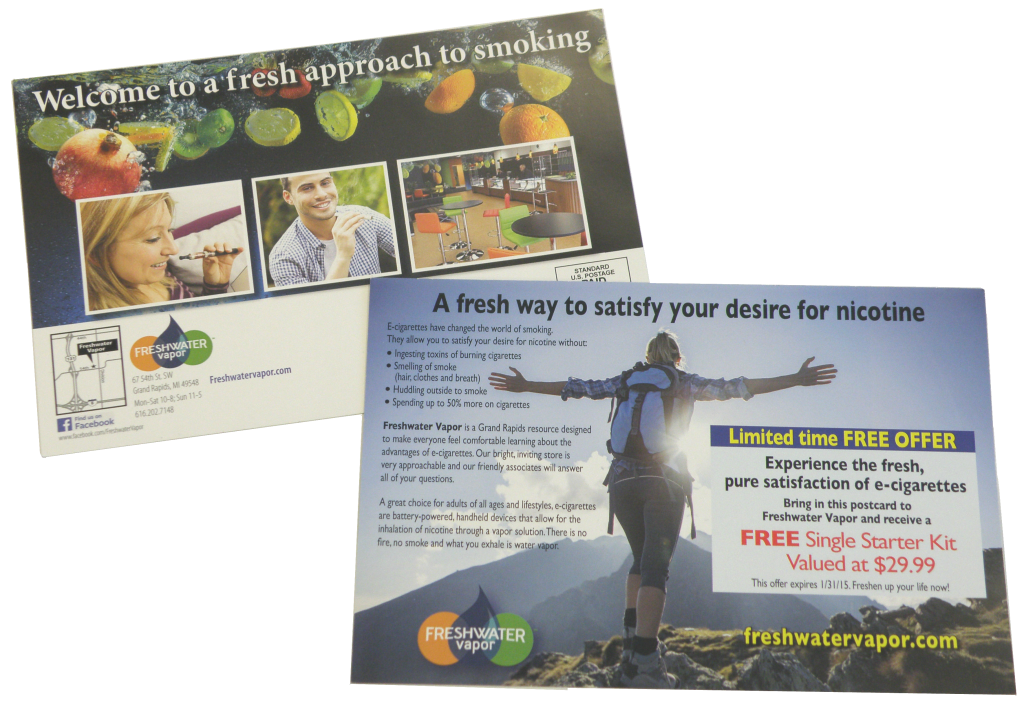 Shortly after their grand opening, Freshwater Vapor, a Grand Rapids e-cigarette retailer, came to Extend Your Reach for help with a direct mail campaign. We identified two challenges:

Freshwater Vapor had built their brand around providing an environment that was welcoming to ALL smokers, however their customers were primarily men. They needed a marketing piece that would demonstrate the benefits of vaping over traditional cigarette smoking, and, most importantly, appeal to adult women smokers. A key to the marketing piece would be to educate women about e-cigs and ease their concerns about transitioning from smoking to vaping.

With an understanding of who Freshwater Vapor wanted to reach, Extend Your Reach recommended a targeted mailing within a set radius around their store.

Extend Your Reach’s designer and copywriter created an attention-grabbing postcard that used imagery and copy to convey the freedom associated with switching from smoking to vaping. The postcard featured an image of a woman on top of a mountain, with the headline “A fresh way to satisfy your desire for nicotine.”

Because we identified education as a primary part of the campaign, we recommended that the postcard include more content than is typically found on a direct mail piece. The postcard described the benefits of vaping offers over traditional smoking with a short description of the variety of products offered by Freshwater Vapor. 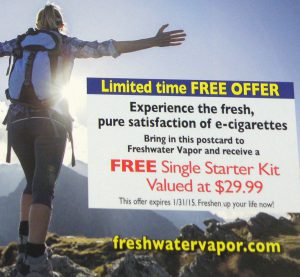 An important element of the postcard was an offer that encouraged prospective customers to visit the store for a free single starter kit. The main idea: to get new customers into the physical store so they could experience for themselves the inviting and welcoming environment Freshwater Vapor had worked so hard to create. The offer also included an expiration date, adding a sense of urgency and encouraging prospects to act quickly. 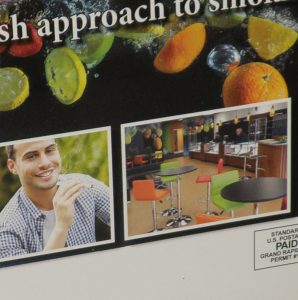 The reverse side included elements that were already a part of the Freshwater Vapor brand, in particular the image of fruit in water that is a mural on the store’s wall and a photo showing the store’s clean and inviting interior.

Freshwater Vapor was pleased with the care that went into planning and creating their postcard. They continue to measure the response.