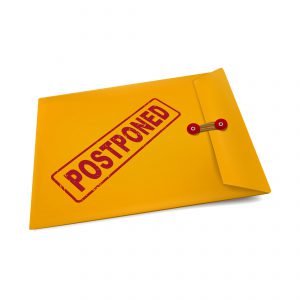 A proposed postage rate increase will NOT happen on April 26, after all.

On Friday, March 27, the Postal Service announced that it would delay the implementation of new market-dominant competitive rates and classification changes until all proposed changes are approved by the Postal Regulatory Committee (PRC).

The decision is the latest in an ongoing narrative, which began in mid-January, when the USPS filed a proposal to increase rates on First Class Mail, Standard Mail, Special Services, Competitive Products, Periodicals and Package Services with the PRC.

On February 24, the PRC approved the proposed increases for First Class Mail, Special Services and Competitive Products, but on March 6, remanded the remaining proposed changes back to the Postal Service. Since then, the increases for Standard Mail, Periodicals and Package Services have again been submitted for approval and returned by the PRC.

On Friday, a memo was sent to members of the National Association of Presort Mailers, explaining that the Postal Service would rather wait to implement price changes until the complete proposal has been approved, rather than “subject our customers to a piecemeal implementation of our new prices…”

The Postal Service will set a new implementation date when it submits a new proposal for Standard Mail, Periodicals and Package Service pricing. Stay tuned.